Ms. Nashila Bibi Sakhabuth, 39-year-old woman from Mauritius had a busy personal and professional life. With prolonged screen times, she suddenly felt a bothersome headache and blurred vision. Initially, she attributed it to increased eyesight problems as she was wearing glasses. The next day she consulted an ophthalmologist from Mauritius. He said that her problems were not related to her eyes and advised her to undergo an MRI scan of the brain.

Ms. Nashila met a neurologist with the scan reports. The family was astonished by the results. The scan revealed multiple saccular aneurysms arising from the important blood vessels of the brain, each ready to explode or rupture. Having just one brain aneurysm could be life-threatening, but Ms. Nashila had multiple aneurysms.

She said, “I was shocked. It felt like a bad dream. I just went to change my glasses, but I found that the blood vessels in my brain may burst any time. My life turned upside down and I feared if I would survive this.”

Saccular aneurysms are balloon-like bulges arising from a weakened area in the wall of a blood vessel. These ticking time bombs in the brain could detonate at any time. If it ruptures, it can cause a host of complications, including stroke, paralysis, brain damage, coma and in the most extreme cases, death.

From disappointment to hope

The chances of the aneurysms rupturing increased dramatically with each hour that Ms. Nashila waited. Adding to the misery of being diagnosed with a life-threatening condition, the required treatment options were not available in Mauritius. Given the complexity of the case, the Mauritian Government along with SWAN Insurance referred her to MIOT International, Chennai for the specialized management of this condition.

She initially had a video consultation with the Neurologist at MIOT, who after assessing her reports gave hope that her condition could be treated. With her consent, the Mauritian government and MIOT International arranged for the arrival of Ms. Nashila via aircraft with stretcher support and a physician. Once she reached MIOT, without any delay, an advanced Bi-planar DSA was employed to assess her condition thoroughly, which revealed the complexity of the case. 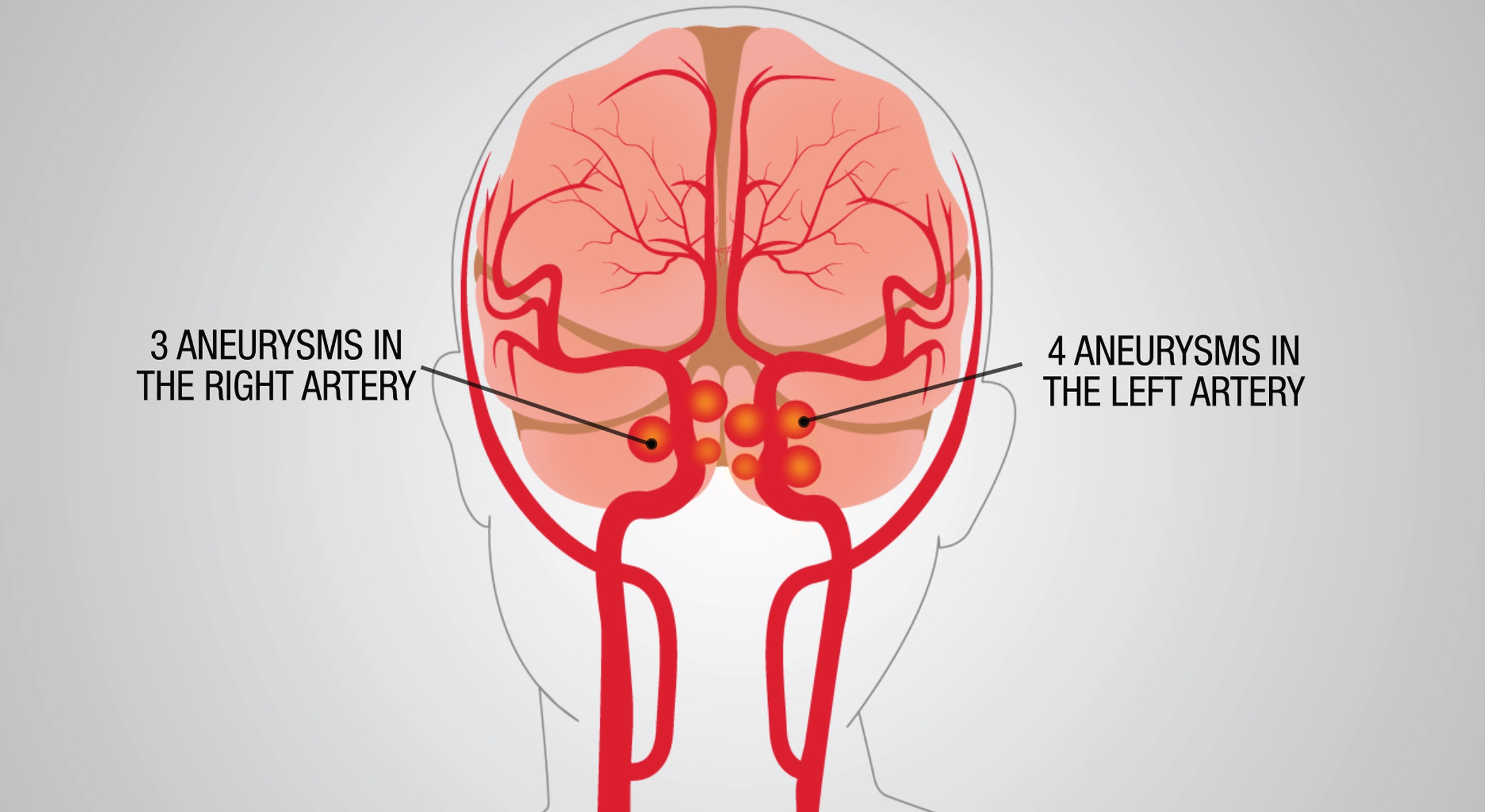 Ms. Nashila had 7 saccular aneurysms in the INTERNAL CAROTID ARTERIES, that supplies blood to 80% of the brain. The aneurysms were found on both sides of her brain, 4 on the left artery & 3 on the right artery.

Considering, she was young with no major history of medical issues; the board evaluated every conventionally available treatment options in practice.

1. Placing a flow diverter, involves placing a device in the parent blood vessel to divert the blood flow away from the aneurysm. This meant, she needed to be on blood thinners for the lifetime. Because she was young and desired to have children, this risky option could have dashed her hope of having a family in the future.

2. Microsurgical clipping, which involves opening a portion of the skull, occluding the aneurysm and preventing rupture with a clip. Because several clips are to be placed within the same artery,this option could result in a stroke or even brain damage.

3. Endovascular coiling was considered but due to the multiplicity, geometry and location, this was also deemed not suitable and extremely risky.

MIOT’s Battle Plan – Out of the box strategy

The expert team decided on an innovative, path-breaking surgical plan to block the part of the blood vessel harbouring the aneurysms and create an alternate man-made channel for the blood to reach the brain. A 4 staged strategy to treat one side followed by another with a space of four weeks was decided.

Such hybrid procedures like this are very rarely undertaken, even at highly specialized centres. However, this plan was thought to be less risky, more resilient, long lasting and there was no need to take blood thinners for the rest of her life. Most importantly, the treating doctors and Ms. Nashila believed in it.

When the treatment plan was discussed with Ms. Nashila, she said “They proposed a treatment, I didn’t expect. They told me that it is complex, that it had to be done in stages and they explained each stage thoroughly.They were very confident in their plan and transparent with the details. It gave me hope and I consented.” 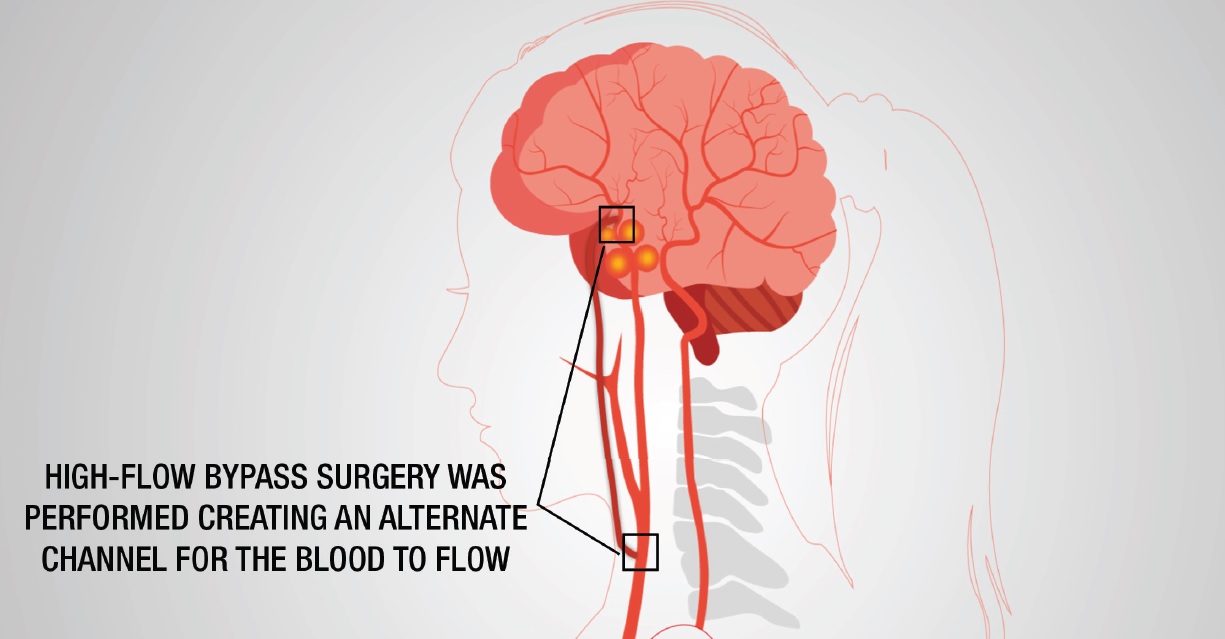 The doctors choose to start with the left side. MIOT Neurosurgeons initially performed high-flow bypass surgery, in which the patient’s radial artery was harvested from the forearm and grafted into the left carotid artery. This intricate procedure was meticulously performed by marking a small opening in the skull and the neck with utmost precision. One end of the graft was connected to the artery at the neck level and another end to the artery above the aneurysms. This created an alternate channel for the passage of blood. 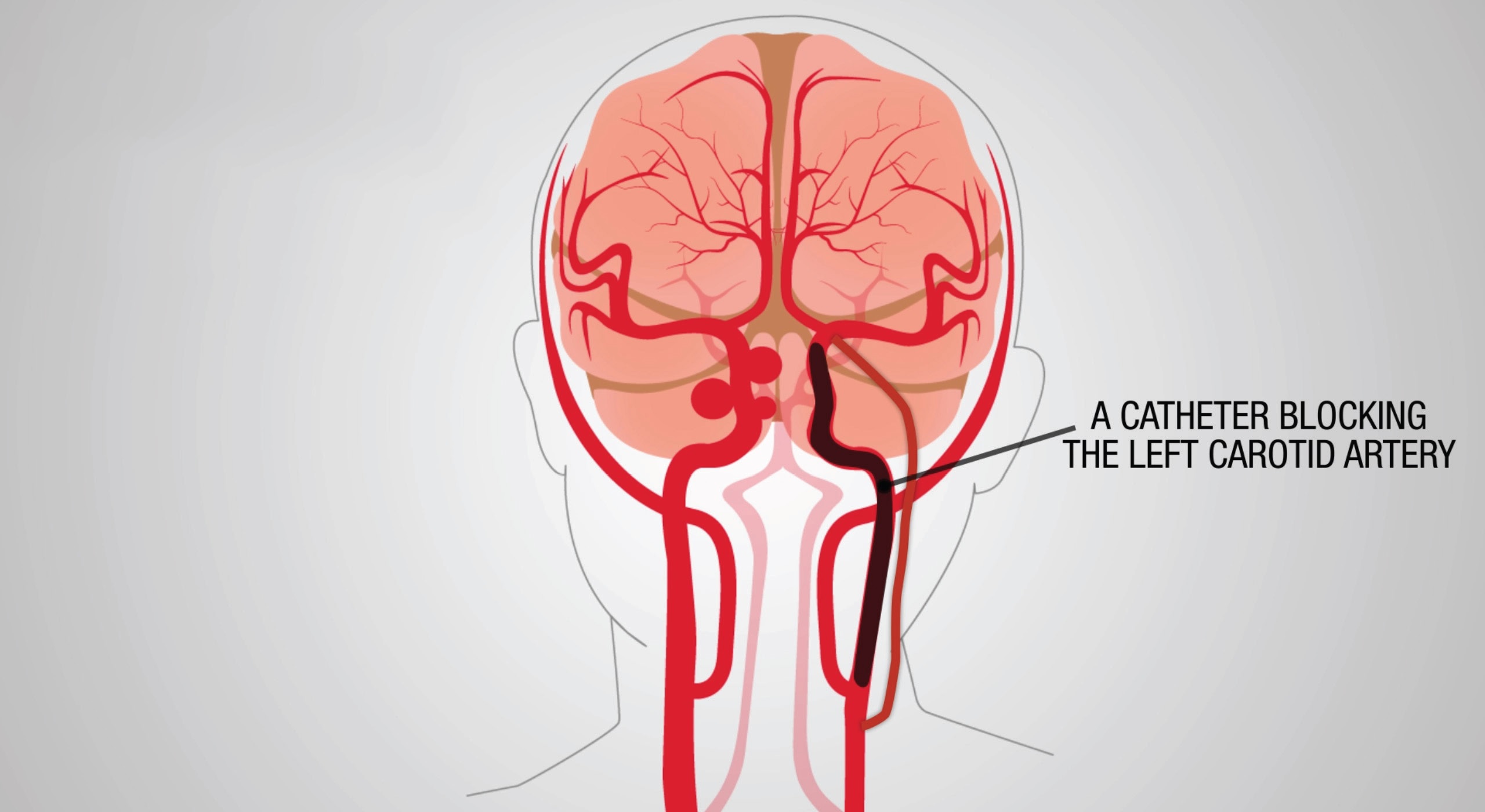 After seven days of ensuring there was an adequate amount of blood flow through the bypass channel, the weakened artery that harboured aneurysms was closed via a catheter by the Interventional Radiology specialists. Soon after this, Ms. Nashila no longer complained of headaches and blurry vision. 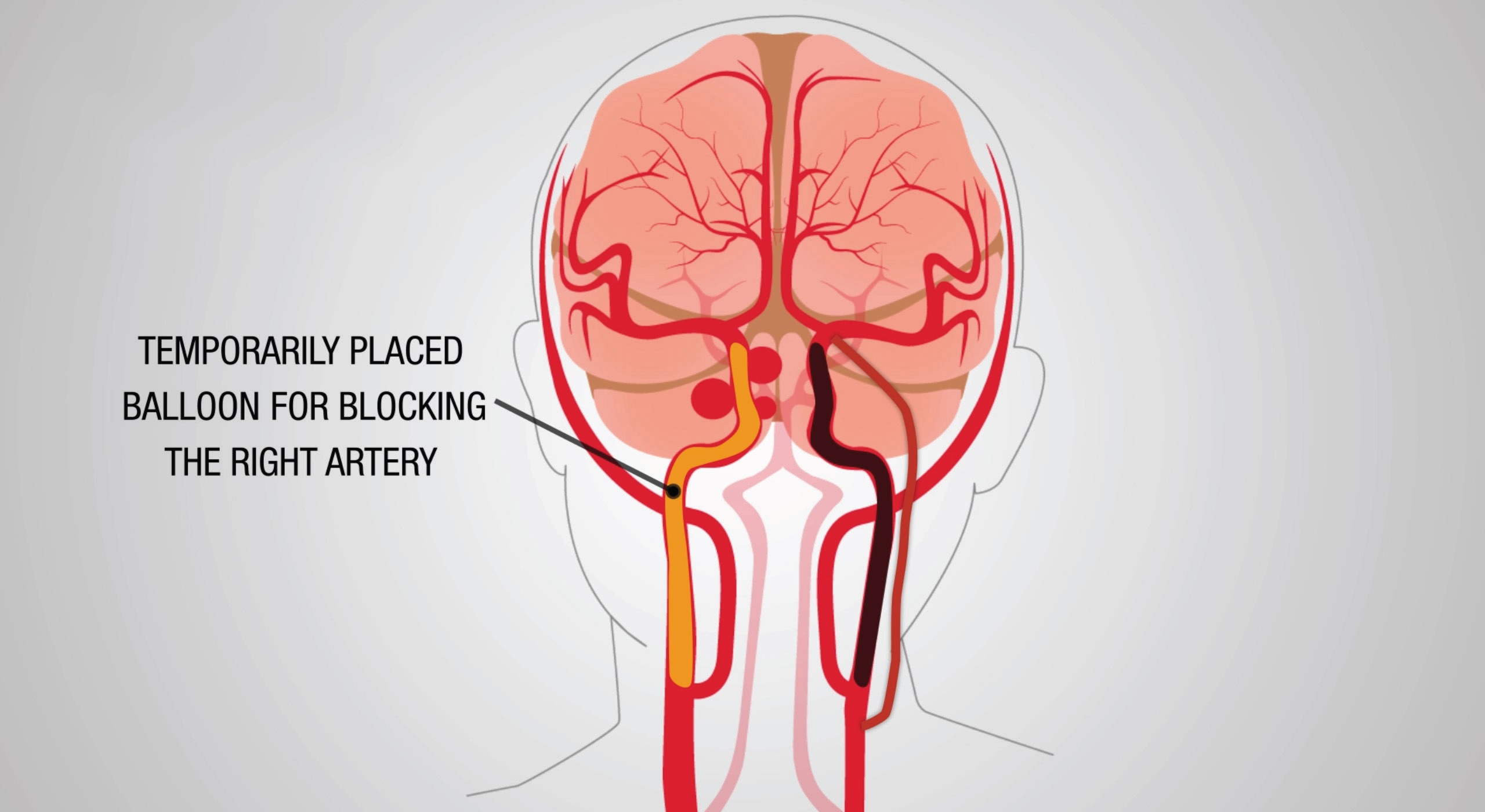 After 4 weeks of interval, the attention was shifted to the right side. The right blood vessel was temporarily blocked with the help of a balloon. SPECT-CT confirmed that the blood flow from the bypass on the left was sufficient to nourish the brain on the right side as well. 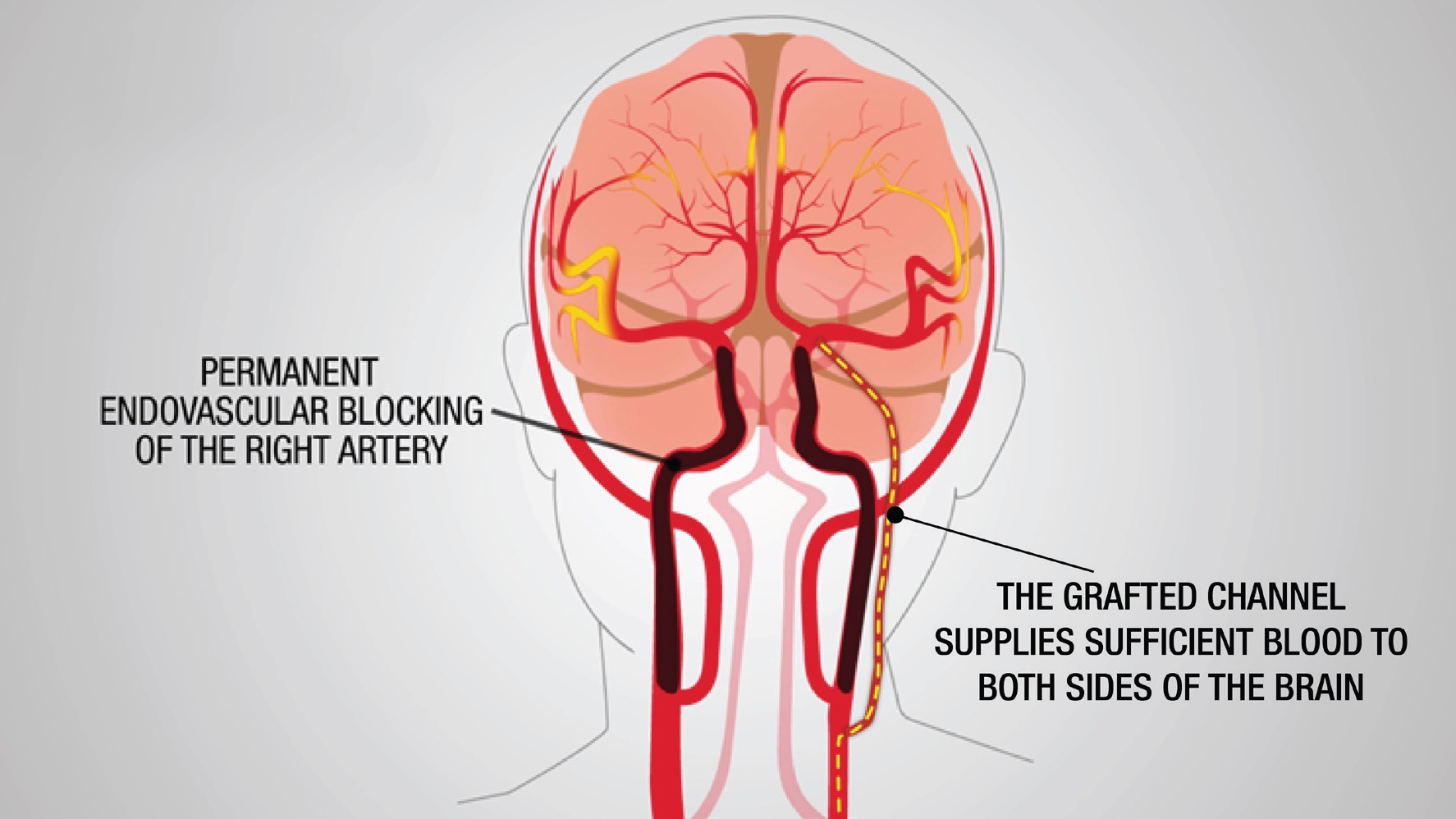 The right-sided blood vessel with the aneurysms was also closed off via the catheter.

The recovery – All odds were defied!!

Ms. Nashila responded to the treatment very well; she made an uneventful recovery with near-zero risk. She suffered mild weakness in her left lower limb. After five days of personalized neuro-rehabilitation, Ms. Nashila has greatly gained mobility and balance. She started walking and even climbed the stairs without any support.

After the recovery, Ms. Nashila said “I am happy that I came to MIOT. I thank the entire team for giving me a second chance at life. I won my fight, not alone but with the confidence and help of MIOT doctors.”

The journey of more than 6000 kilometers, an in-hospital stay of more than 60 days, 5 endovascular procedures, and 1 major neurosurgical procedure, Ms. Nashila became free of the aneurysms and their life-threatening risks. MIOT’s advanced hybrid treatment strategy, helped defuse the ticking time bombs on time.

Ms. Nashila is back on her feet, much stronger and much more focused. She travelled back to Mauritius, resumed her day-to-day activities, and is waiting to join her office very soon.

MIOT has always been a favourable destination to patients from Mauritius and to over 130 countries who seek quality medical treatment at an affordable cost. To serve the people of Mauritius better, MIOT International has now extended its care and support through its Information Centre at Port Louis, Mauritius – which will act as a gateway to world-class healthcare. 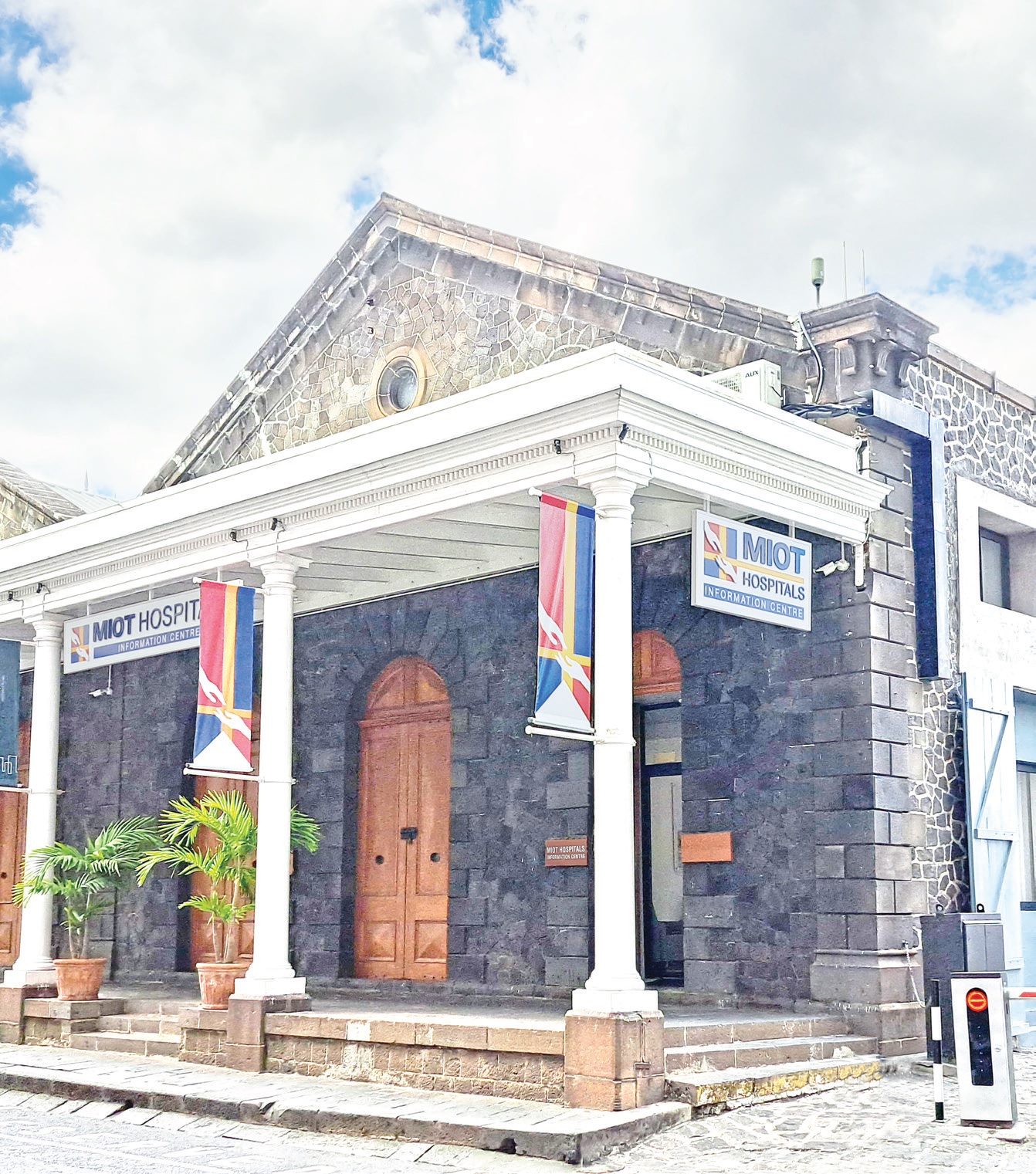 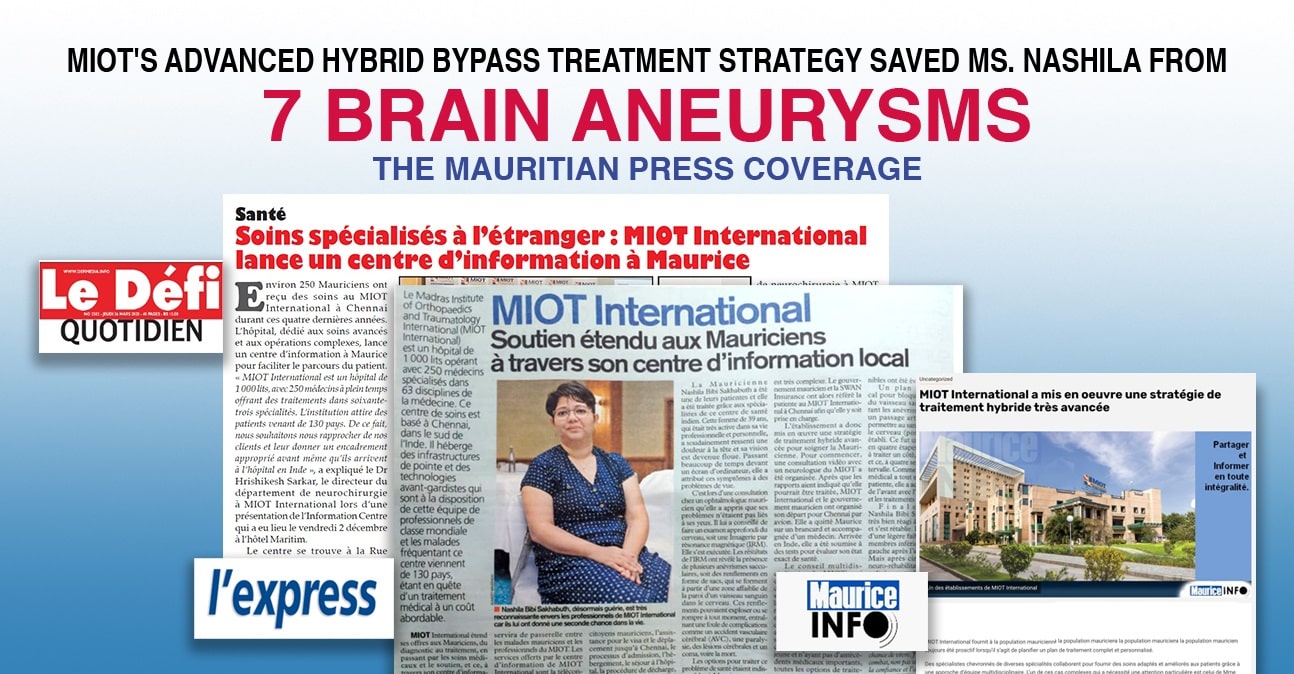