“Accidents, and particularly Road Traffic Accident do not happen – they are caused”

India ranks 1st in number of Road Traffic Accident death across 199 countries in the world, followed by China and USA. It contributes to about 11% of world accidental death due to Road Traffic Accident. This increase was higher than global average of 8%. The highest death rates were noted in Tamil Nadu, Madhya Pradesh, Uttar Pradesh, Karnataka, Kerala states.

The Road Traffic Accidents are the leading cause of death of young working people who are the bread winners of the family in most of the times. (The LANCET public health). 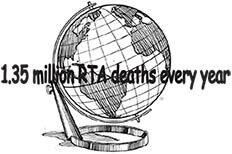 In today’s world, the number of vehicles on the road are increasing day by day, with new development and technology there is a rapid boom in the transportation which has also unfortunately lead to increase in Road Traffic Accident.

“Every 24 seconds someone dies on the road”

Tamil Nadu government statistics shows that by average each month about 4000 accidents occur in the year 2020, with Chennai city, Cuddalore and Coimbatore being the top three states.

Majority of these deaths are happening among two wheelers, due to road injuries. This is a leading cause of death among young adult males in India (15-39 years).

Pedestrians, motorcyclist and cyclist are known to be vulnerable to these injuries as they are less protected than the drivers or passengers of the car. Two wheelers account for 35% of total road accident deaths followed by cars, taxis, Vans & LMVs (18.6%) and pedestrians (14%) followed by share of Trucks of (10.7%) and share of buses of (4.9%) and share of bicycles at (2.9%)

These Road Traffic injuries have far reaching economic implication including  loss of primary bread winners for the family incurring huge treatment cost for the family which can push them into poverty and also cause huge economic loss and overall loss to the nation.

The first 60 minutes after the traumatic injury which is the most crucial period that determines the patient’s outcome has been termed the “Golden Hour”.

– “There is a golden hour between life and death.
– If you are critically injured you have less than 60 minutes to survive.
– You might not die right then; it may be three days or two weeks later-but something has happened to your body that is irreparable.”

The concept that DEFINITIVE RESUSCITATIVE TRAUMA CARE must be initiated within this early window period has been publicized, taught, and practiced worldwide for more than four decades.

But unfortunately in India, victims are unable to reach the right hospital within the golden hour due to lack of awareness and proper rescue facilities.

After reaching the hospital emergency, the main steps in the management of these multiple injured patients are:

Both are performed together which avoids loss of valuable moments of the golden hour essential for the patient’s survival.

Resuscitation should be initiated simultaneously as the primary assessment is done which includes replacement of the blood loss in the injury with blood, blood products or blood substitutes.

As the resuscitation process is done simultaneously the immediate life threatening injuries are also identified which may be:

Those victims with heart rate going above 120, BP dropping below 80, drowsy & unstable should be immediately rushed to a hospital.

In cases of abdominal / chest injuries especially with internal bleeding will require immediate surgical intervention to save the life and consequence of prolonged hypovolemic shock.

The most common endangering factor for RTA victims is internal or external bleeding. Especially when large volumes are blood are lost, BP of the person drops very low causing Hypovolemic shock. Also as a result of blood loss, Oxygen and blood to vital organs is reduced leading to primarily kidney damage and then other organs including the brain.

If the complications from shock are not managed appropriately and expeditiously within the golden hour, the damage cause will become irreversible.

What one should do?

For above said reasons, it is therefore a priority to transport accident victims with severe trauma as fast as possible to a Trauma & Resuscitation centre or a Tertiary Care Hospital.

The Trauma & Resuscitation centre should have a team and infrastructure to identify the seriousness of the injury and also to handle the trauma. If the Injuries need higher grade care, then the patient should be shifted to a Tertiary Care Trauma Referral Centre.

In simple terms, the accident victims should reach the right hospital at the right time to get the right treatment for higher chances of survival and early recovery.

The golden hour of multiple injured patients must be utilised properly to revive and give them back life they expect to have.

Collective social responsibility of the society:

It is our collective social responsibility of the society to be aware of this “Golden Hour Concept” which includes field triage guidelines, emergency medical services and rescue of trauma victims to the Trauma & Resuscitation centre or to the Tertiary Care Centre within the golden hour.

Goal No 3- Good Health and well being, emphasis that by end of 2020 reduce the number of global deaths and injury from RTA and further The third Global Ministerial Conference on Road Safety was held in Stockholm, Sweden on 19 and 20 February, 2020. At this conference, all the participants including India reaffirmed their strong commitment for achieving the goals of reducing road accident related deaths by at least 50% by 2030. It is our duty as an Indian citizen to work responsibly and to fulfil the commitment given in reducing the road traffic accident relates morbidity and mortality.

Encouragement from Govt’ of India:

The Government of India has initiated “Good Samaritans” scheme to encourage general public by awarding 5000 Rs/- to those who save the life of a road traffic victim by rushing them to hospital within the golden hour.

The society should participate in association with the trauma care providers which will save lives of young youth of our country.

MIOT Hospitals which started as an Orthopaedics and Trauma care centre, has been a LEVEL 1 POLY TRAUMA CENTRE for the last 4 DECADES following the DEFINITIVE RESUSCITATIVE TRAUMA CARE since its inception. As a leading tertiary trauma referral centre as well as a teaching hospital, MIOT sees more than 5000 severe multiple injury cases every year.

The MIOT accident and trauma team comprises of trained paramedics, doctors and nurses, who work together 24/7 to contain the extent of damage and give severely injured patients the specialised and holistic care they require. Since severe accident and trauma may involve injury from head to toe, external or internal, MIOT accident and trauma specialist works closely with its inhouse surgeons from orthopaedics, neurosurgery, urology, maxillofacial surgery, and reconstructive and plastic surgery, pulmonology, surgical gastroenterology, intensive care, physical and occupational therapists, counsellors and nutritionists to offer patients early, total care.